Recently, I attended two events hosted by the Portland Regional Chamber of Commerce where I was able to hear my local politicians in person. About two weeks ago I went to a luncheon where the keynote speaker was Michael Brennan, Mayor of Portland, Maine. Then yesterday, I went to their breakfast-time “Eggs & Issues” event where Paul LePage, Governor of Maine was the featured speaker.

As prominent local elected officials, I read and hear a lot about each of the men in the news and media, but I had never seen either of these politicians talk live.

Portland and Maine: Struggling but reaching

I live, work and own my business in Portland, Maine.

I grew up in Massachusetts and I had lived most of my adult life in Chicago. But in late 2005 my husband and I chose to move to Portland, Maine. We are one of the many people who move to Maine, and to the Portland area, because of the quality of life.

Both Portland and Maine end up getting some prominent listings whenever there are best/worst lists in magazines or web sites. Portland has been called the Foodiest Small Town, and we’re even ranked number 5 for America’s best Cities for Hipsters. Maine is currently listed as the most peaceful state in our country. Forbes Magazine has called Portland America’s most livable city. Yet, Forbes has also ranked Maine the worst state in the country for business the third year in a row.

While we all love living in Vacationland, the economic realities of living here can be tough.

Let me describe the two speakers I heard, and my reaction.

Both speakers gave an overview of what’s going on in their domain. Brennan spoke about Portland; LePage, the bigger state.

Mayor Brennan talked about the struggles of Portland: lack of good jobs, and the need for better educated children. He then presented his list of key items he was working on to improve these areas. The Mayor talked about several private/public partnerships that were growing and helping the city achieve its goals. As he talked about his vision and love for Portland I felt my pride and energy growing. I was so glad to have chosen to live in Portland. I love the city already and now even better things are on the horizon. As his talk concluded, I approached one of the leaders of the private/public groups he mentioned and asked how I could get involved.

Governor LePage also talked about the struggles of Maine and they focused on the same two key themes: ramping up business in Maine and improving the education system. But what a contrast. The more he spoke the more down I felt. He really convinced me that the problems in Maine were practically unsolvable. He did not demonstrate to me that he had the vision, leadership and enthusiasm to accomplish great things. He had a lot of excuses, and it was always someone else’s fault as to why things were just so bad in the state of Maine. I walked out pretty glum.

Leaders are the face of your brand

Mayors, councilors, governors and presidents can inspire citizens. Elected politicians also represent and promote a region to outsiders. They become the “face” of a city or state.

Mayor Brennan inspired me to take action and to become part of his vision. Governor LePage just made me depressed. 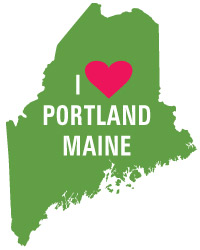 Does your brand inspire others to take action? Does your web site, the way you talk, and the way you present you and your brand convey an optimistic and energetic approach? People want to be surrounded by other winners. They want to work with other successful people so they can gain success, too.

<   3 Ways Your Analytics Are Misleading You
Demystifying the Logo Design Process: Retail Association of Maine Rebranding   >